I want to solve the mysteries which have yet to be discovered.
Aiming to be the best in the world in the international space race.

Professor in the Graduate School of Engineering, Department of Aerospace Engineering, the Space Robotics Lab at Tohoku University.
Director of the Center of Robotics for Extreme and Uncertain Environments (CREATE)

My life began to change greatly for the better
when the passions I had kept in my heart began to blossom.

After graduating, he chose to move on to graduate school. It was in the early 1980’s when Japanese robotics technology blossomed. Yoshida set his mind on studying robots using his engineering knowledge for his undergraduate thesis, but he couldn’t join the laboratory of his choice. “The laboratory I wanted to join was very popular, and I lost my chance to join in a tense match of rock-paper-scissors. So I ended up spending a year in the laboratory that was my second choice and I finally got into the robot-related laboratory when I started my master’s degree." As he continued his research, his aspirations to join the doctorate program grew, so he went to talk with his professor about deciding the theme for his doctorate thesis. But he received an unexpected reply. “Someone else already wrote about the theme you’ve chosen. I heard that you like astronomy. Why don’t you work on something to do with space robotics?” Professor Yoshida looks back now and can see how his life started to change drastically by those words. He had taken the long way, but nothing was a waste along the way. Since he kept his genuine love for space, it led him to a chance to connect two things he enjoyed, space and robot engineering. “It is very important to keep stock of various passions we have within ourselves. A time will come when they are brought out all of a sudden and become treasures. Everyone has their own treasure, and you have to seize the chance to make it shine.” 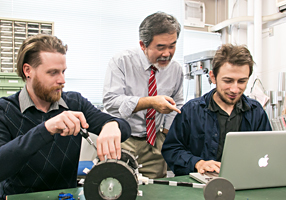 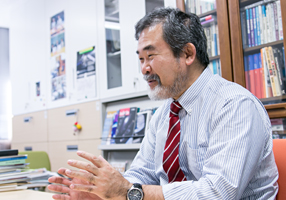 When the time comes to go to the Moon,
We will provide our own technology.

In 1995, Professor Yoshida became an associate professor at Tohoku University, and now, 17 years have passed since he launched his study of moon exploration robots in 1997. With his desire to “provide our own technology when the time comes to go to the Moon,” he has been diligently working on his research. He has been involved in important projects such as in the development of HAYABUSA, the spacecraft that landed on an asteroid 300 million kilometers away from Earth and returned safely. In 2011, he established the Center for Robotics in Extreme and Uncertain Environments (CREATE), which nine professors of research laboratories from Tohoku University belong to. “Quite literally it is a center to study robots that work under various extreme conditions, and we study robots for space exploration as well as those designed for application to disasters and medical science. The Great East Japan Earthquake occurred on March 11th, just as we were about to start a new development project. We were asked to launch our robots into the affected areas as soon as possible.” It was an urgent task that could lose no time. They sent their robots, which were still in prototype stages, into practical use within 3 months and the robots were deployed to work in the Fukushima Daiichi Nuclear Power Plant. They were able to do this so quickly because of the groundwork they had established. The result was that their robots were fully utilized to thoroughly explore the dangerously contaminated nuclear reactor building. 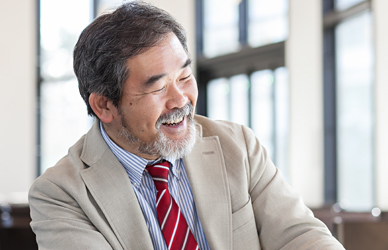 Solving mysteries that have not even been discovered
is the source of my passion.

“Japan has been constantly improving technology, and there is a strong determination to keep ahead of the competition around the world.” The Japanese lunar exploration probe, KAGUYA, launched in 2007 using its high-resolution camera, found holes that lead to undiscovered lunar underground. This new discovery fuels Professor Yoshida's motivation. “I want Japan to explore the lunar underground that Japan discovered and I want to do that myself. We will take advantage of the expertise we have gained over the years and of our ability to get started quickly. Professor Yoshida, who is on the cutting-edge of research, still has a dream that has not come true. “I’d love to fly to the moon. It would be so exciting to go to a world that cannot be experienced in our everyday life. I hope that the day will come, and I believe that it will come soon, when space becomes one of our travel destinations, not just for a selected few, but for everyone.” He says that to solve the mysteries that haven’t even been discovered yet is the mission of researchers, and more than anything it is the source of his passion. He wants to continue sharing his joy of exploring the unknown with as many students as possible, and that must be one of the reasons why Professor Yoshida chose the Tohoku University as his academic hub.

There is only a year and a half to go before the deadline of the international space development contest organized by Google. The moment of becoming the best in the world is steadily approaching. 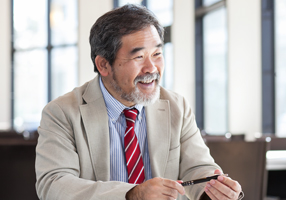 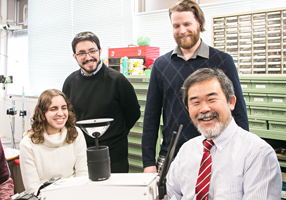 Professor in the Graduate School of Engineering, Department of Aerospace Engineering, the Space Robotics Lab at Tohoku University.
Director of the Center of Robotics for Extreme and Uncertain Environments (CREATE)
Professor Kazuya Yoshida 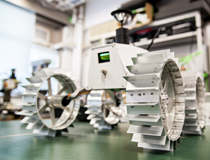 He graduated from the School of Engineering at the Tokyo Institute of Technology in 1984, and completed his master’s degree in 1986 and obtained Doctor of Engineering in 1990. After working as an assistant professor at the Tokyo Institute of Technology and then as a visiting scientist at the Massachusetts Institute of Technology, he began working at Tohoku University in 1995, taking on his present post from 2003. His research fields are space robotics, dynamics and control of space robots, space exploration technology and the development of microsatellites. He has also been contributing to international education in space engineering as a visiting educator at International Space University since 1998.

Department of Mechanical and Aerospace Engineering
no cache