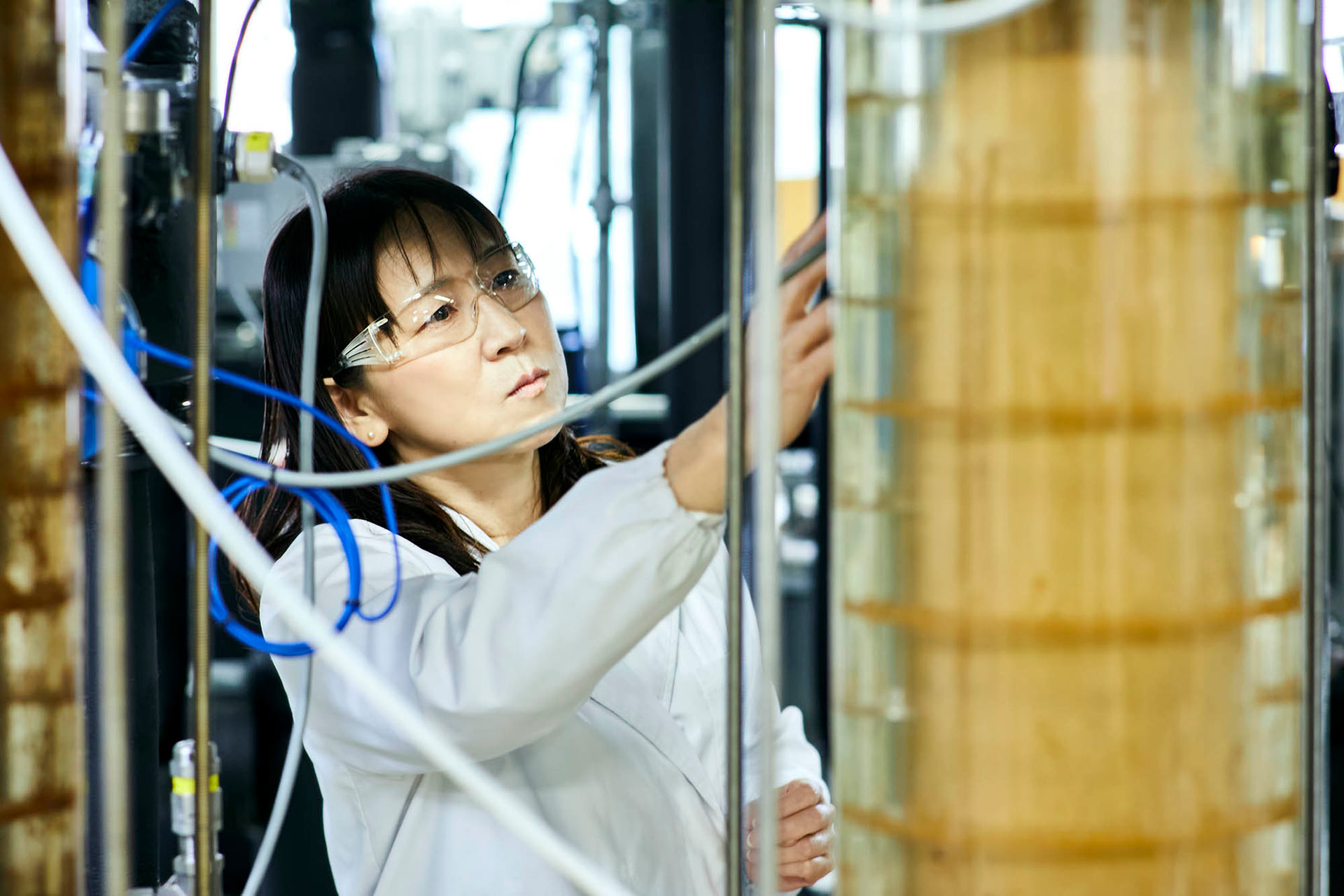 An experiment that started
with an inspiration gave rise
to the invention of the world's
first biodiesel fuel
production method.

One cause of global warming is the rise in carbon dioxide levels due to the use of fossil fuels such as petroleum and coal. To reduce fossil fuel usage, a promising alternative is biofuels made from biologically derived organic resources other than fossil resources. Initiatives are underway to produce biodiesel fuel (BDF) from canola oil in Europe, soybean oil in North and South America, and waste cooking oil in Japan; with usage in Europe advancing in particular because of government support.
The most common BDF production method is transesterification reaction of animal/vegetable oil and alcohol using an alkali as a catalyst. However, in this method, there were significant challenges in terms of cost and environmental burden, including (1) deterioration of fuel quality due to soap being formed by reaction between the oil and alkali, (2) production of glycerin as a by-product alkali contamination, and (3) a complicated purification process being required to improve fuel quality. But in 2005, the Graduate School of Engineering, Tohoku University published a new BDF production method that resolved these challenges in one fell swoop. At the heart of R&D was Professor Naomi Shibasaki-Kitakawa of the Department of Chemical Engineering. She says, “When I attended a certain conference, I heard about a presentation on a BDF production method that used an enzyme attached to an ion-exchange resin as a catalyst. The ion-exchange resin is a synthetic resin that has the ability to exchange its own ions with ions in a solution, and it is used to separate specific substances. We knew that the ion-exchange resin itself had the same catalytic property as the enzyme, so we thought that it might be possible to catalyze the BDF production without the enzyme. We started the experiment based on that knowledge and inspiration. The reaction proceeded at a surprising rate, and BDF was easily produced. This became the world's first successful case of BDF production using a general-purpose ion exchange resin, commonly used in water treatment, as a solid catalyst. Moreover, this method has the distinctive features of no soap formation and no catalyst contamination in the product.” 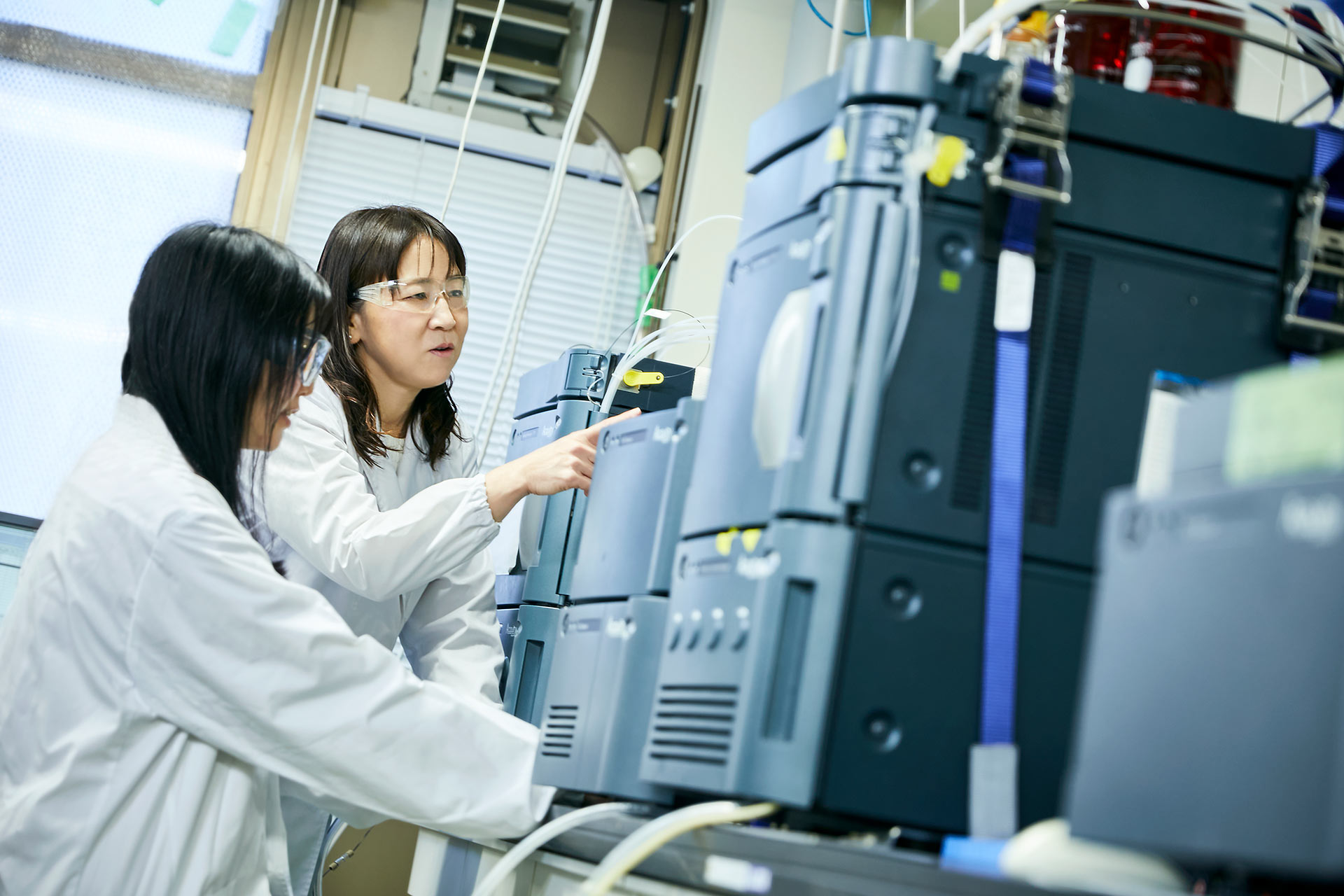 In order to implement new
technologies in society,
we need to listen to the voice
of the field and consider
from their point of view

Once the new method for BDF production was announced, many inquiries were received from the media and companies nationwide. Nonetheless, the amount of BDF that could be produced in 1 hour was just half a cup, and it was much more expensive than the current method Professor Shibasaki-Kitakawa explains, “After a new technology is developed, chemical engineering researchers like us are good at using that technology to create devices and processes for mass production. It is very exciting to consider what kind of reactors to use, how to operate it for mass production, and how to meet cost requirements. Research on BDF production utilizing ion-exchange resin catalyst advanced to the stage of implementation within society, the real goal of chemical engineering.” The important thing in conducting research for implementation within society is to actively communicate with manufacturers and users, and reflect their sensibilities and experiences in the research. She says, “Researching only in the lab can lead to many failures, for example, including technologies too advanced to control in the field, creating a device too expensive for practical usage, etc. So, we have paid attention to what the problem was for the users, and considered from the user’s point of view which solution was effective, in order to optimize the technology for them.”Professor Shibasaki-Kitakawa and her team have constructed a system where a column packed with cation-exchange resin and a column packed with anion-exchange resin are connected in series. By simply passing raw materials through the resin-packed columns, high-purity fatty acid esters used as BDF can be automatically produced. In 2016, a distributed small-scale fuel production device and a centralized resin regeneration facility were installed in Tanegashima, Kagoshima Prefecture, and verification testing of a BDF production system suitable for local production and local consumption has been underway. She says, “In any kind of research, there are challenges or so-called bottlenecks to overcome. A key challenge in this research was that the amount of liquid solution needed to restore the reduced activity of the resin catalyst was eight times more than that of resin. It took us ten years to establish a recycling method that reduced costs and the environmental burden.” 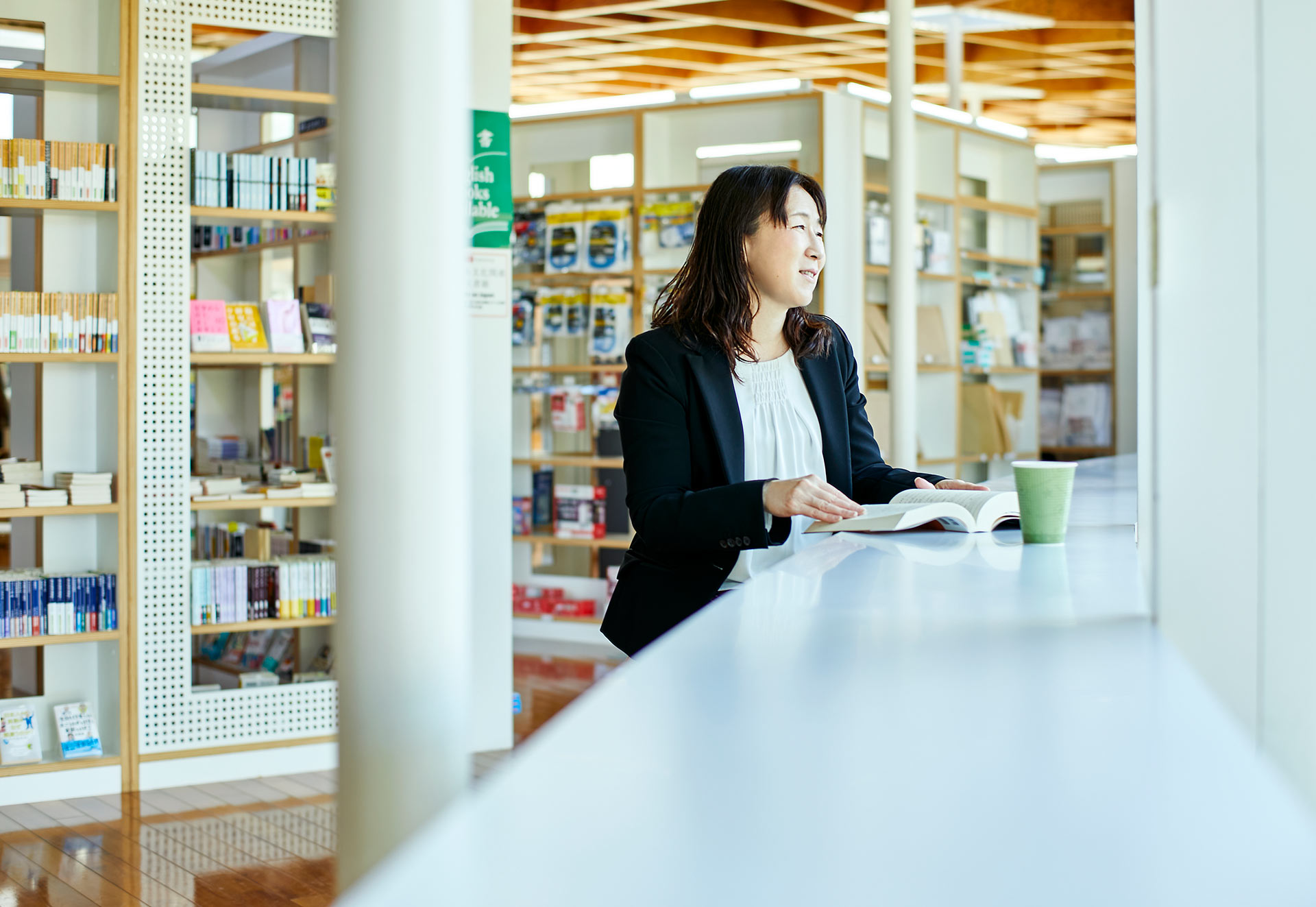 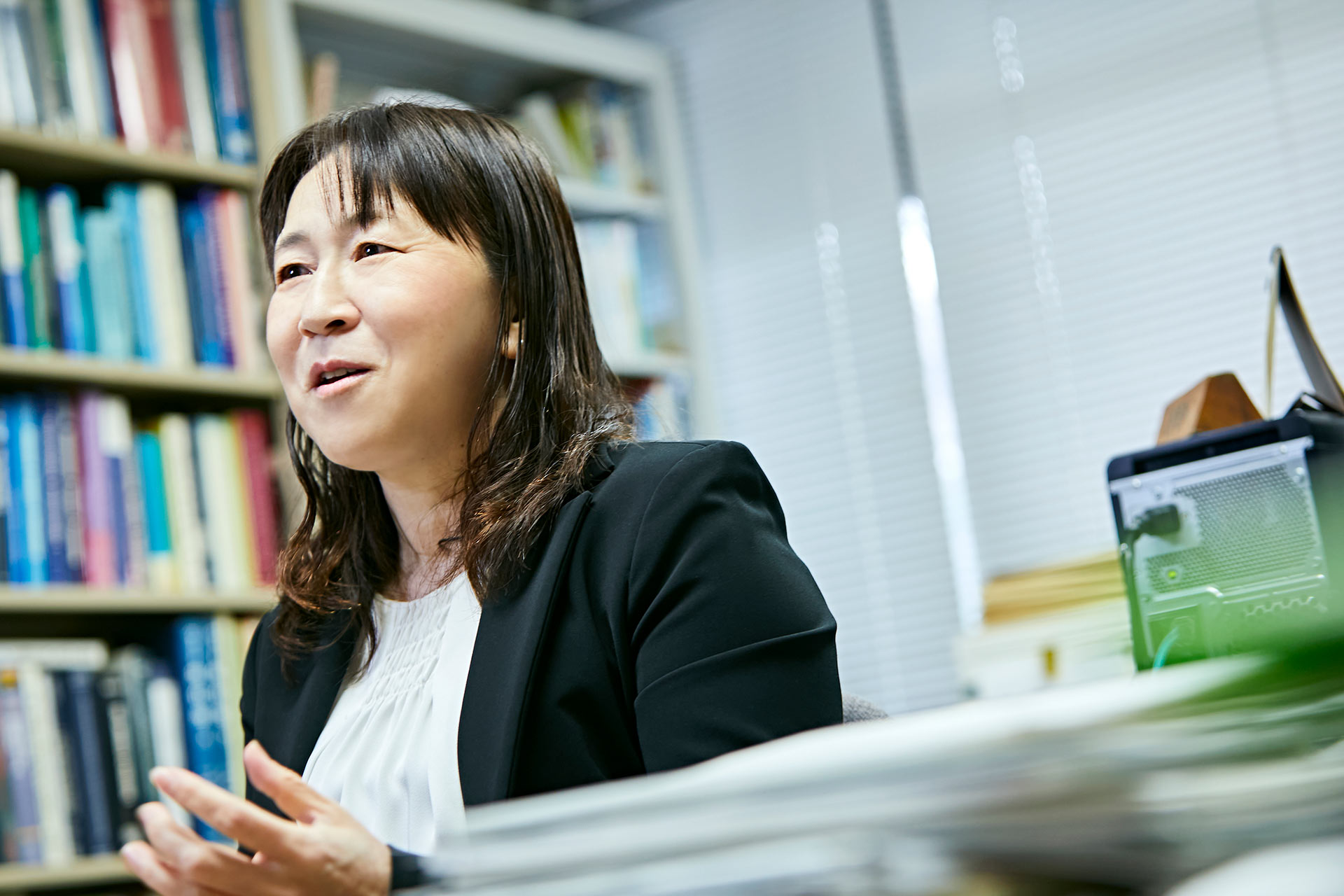 As research on BDF production methods progressed, new research themes emerged. One of them was the development of technology to extract vitamin Es with high efficiency. The raw material used for BDF production was the unused oil generated in large quantities during the cooking oil refinery from rice bran. She explains, “Initially, I was thinking of using crude rice bran oil itself as a raw material to produce BDF. When I talked to a rice bran oil company about this idea, I was told that the idea was nonsense because rice bran oil could be sold at a much higher price. However, they also told me that there was a lot of unused oil that had been incinerated because there was no effective use for it. This unused oil turned out to be very attractive. It contained "Super Vitamin E,”which has attracted attention as a health functional component in the prevention of lifestyle-related diseases, and it was discovered that Super Vitamin E was adsorbed by the resin as the unused oil passed through the device for the BDF production. At first, we was were disappointed, thinking that the vitamin E contained in the oil had disappeared and was decomposed. But when we repeatedly thought about why it disappeared, we came up with the possibility that vitamin E was simply adsorbed by the resin. Then we came up with the idea that vitamin E could be easily recovered by supplying a solution that contained a component that would be more easily adsorbed by the resin. As a result of such trial and error, we were able to extract high-purity Super Vitamin E.”Professor Shibasaki-Kitakawa received the Green Sustainable Chemistry (GSC) Award in 2017 from the Minister of Education, Culture, Sports, Science and Technology in Japan, granted to chemistry and chemical technologies that support the development of a sustainable society. In 2018, she founded Phytochem Products Inc., a start-up at Tohoku University. She says, “If functional components can be extracted from unused waste oil and commercialized, the price of rice bran can be raised, and profits can then be passed on to farmers, which will promote a better economic cycle. In the future, we'd like to establish a large-scale manufacturing facility in the Tohoku region to create employment and industry.” 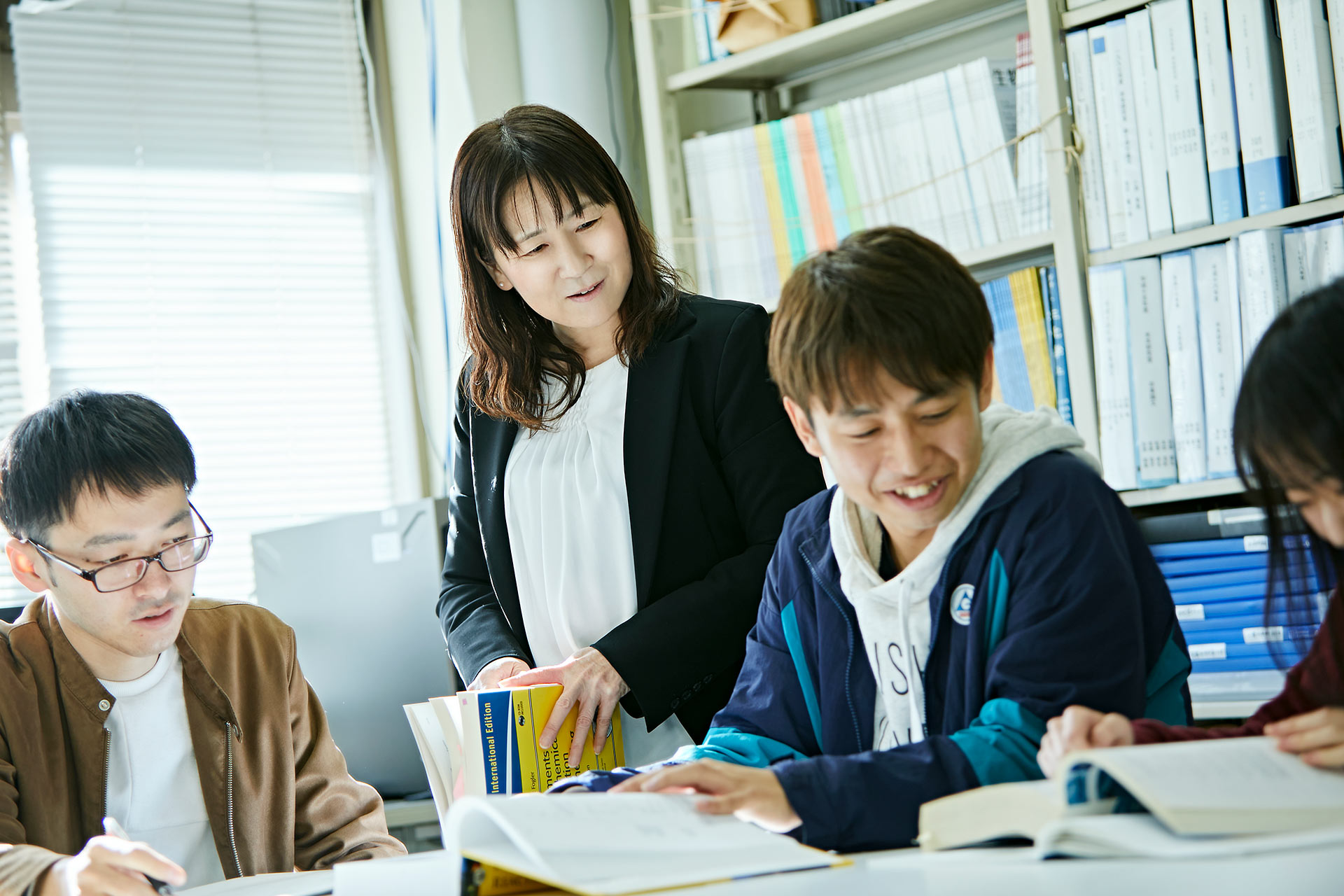 Failure is inevitable.
Accept it for what it is.

Professor Shibasaki-Kitakawa, who is from Saitama Prefecture, chose to study at the School of Engineering in Tohoku University, because she thought that Tohoku University, a comprehensive university that emphasizes 'research first,' had the environment where she could achieve the goals she had set during her high school years. Her goals were quite vague: (1) to do something that would leave her name in history, (2) to make a living by doing something she liked, and (3) to accomplish something as the first woman to do so. She explains, “I achieved these three goals rather quickly. I left my name in the world by writing academic papers. I get paid by doing experiments and research that I love. I was the first woman to acquire a PhD in the Department of Applied Chemistry, Chemical Engineering and Biomolecular Engineering. Some high school students decide which lab to join and which research themes they want to work on before entering university. But I’d like to tell them not to decide their future based on their limited knowledge because today’s cutting-edge topics are not always cutting-edge in 10 years. Tohoku University's School of Engineering has about 300 laboratories, and each lab is working on the latest 10 to 20 research topics. The important thing is to not think in a limited way, but to have a broad perspective. I feel that one can only gain limited happiness and sense of achievement if their perspective is narrow.”Looking back on her life in research, Professor Shibasaki-Kitakawa says that “failure is where new discoveries are.” She says, “There are more failures than successes because we work on unknown research topics. In the world of chemical engineering, chemical reactions are represented by mathematical formulas, which are used to make predictions. Predictions are the ideal, and experiments do not always give the expected results. So, what we need to do as researchers is to look at the reality and understand what is actually happening and why. We can reach better processes and better reactors only by accepting the failure.”