A cheap, biocompatible white powder that luminesces when heated could be used for non-invasively monitoring the temperature of specific organs within the body. Tohoku University scientists conducted preliminary tests to demonstrate the applicability of this concept and published their findings in the journal Scientific Reports.

Thermometers measure temperature at the body's surface, but clinicians need to be able to monitor and manage core body temperatures in some critically ill patients, such as following head injuries or heart attacks. Until now, this is most often done by inserting a tiny tube into the heart and blood vessels. But scientists are looking for less invasive means to monitor temperature from within the body.

Applied physicist Takumi Fujiwara of Tohoku University and colleagues in Japan investigated the potential of a white powder called zirconia for this purpose.

Zirconia is a synthetic powder that is easily accessible, chemically stable, and non-toxic. When heated, its crystals become excited, releasing electrons. These electrons then recombine with 'holes' in the crystal molecular structure, a process that causes the crystals to emit light, or luminesce. Because of this material's advantageous properties for use in the human body, the scientists wanted to test and see if its luminescence could be used for monitoring temperature.

The team heated zirconia under an ultraviolet lamp, and found that as zirconia's temperature rose, its luminescence intensified. The same thing happened when a near-infrared laser light was shone on the material. This demonstrated that both heat and light could be used to induce luminescence in zirconia.

The scientists next showed that zirconia luminescence was visible with the naked eye when placed behind a piece of bone and illuminated using a near-infrared laser.

Together, the demonstrations suggest zirconia could potentially monitor internal body temperature by injecting it and then shining a near-infrared laser light on a targeted location, such as the brain. The intensity and longevity of the material's luminescence will depend on the surrounding temperature. 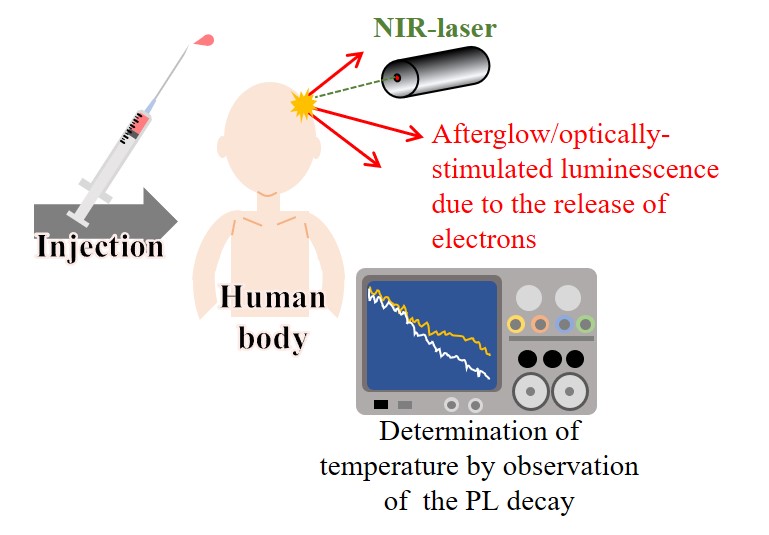 Internal organ temperature could be estimated following injection of a synthetic luminescent substance and targeted infrared irradiation, based on how long it takes for the photoluminescence to decay. ⒸTohoku University

"While this fundamental study leaves some important issues unresolved, this work is a novel and promising application of [synthetic luminescent substances] in the medical field," the researchers conclude. Going forward, the researchers hope to discover a method that makes the wavelength of luminescence from zirconia in the region of red to near-infrared since it makes for better transmissibility for human tissues; thus, allowing for clearer information to be obtained.