Understanding the skin damage caused by rubbing could lead to better topical skin treatments and help prevent the formation of new routes for viral and bacterial infection.

Tohoku University biomechanical engineers have developed a better understanding of the damage that can be caused by something rubbing against the skin. The study was published in the International Journal of Pharmaceutics. Kenji Kikuchi, who was involved in the study, says their findings suggest that damaged skin from rubbing face masks and coverings could potentially provide a route for transdermal virus infection, however further research would be needed to investigate how much rubbing is cause for concern.

The uppermost part of the skin, called the stratum corneum, is formed of layers of keratinocyte cells suspended in a lipid matrix. The stratum corneum plays an important protective role, forming a barrier against the invasion of viruses and bacteria, maintaining skin hydration, and managing skin recovery following damage. 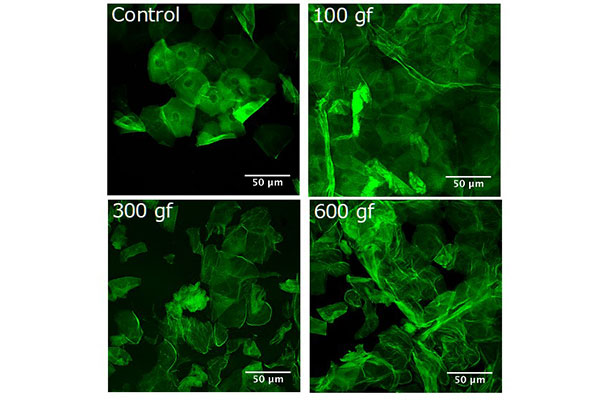 Kikuchi and colleagues at Tohoku University in Japan wanted to develop a more in depth understanding of the mechanics of skin damage caused by rubbing. This could help scientists develop more effective drugs that are applied through the skin and to understand how to better prevent viruses and bacteria from gaining access to the body through damaged skin.

The researchers measured the mechanical effects of rubbing on pig skin, which is very similar to human skin. A gear rotated against skin samples at known rates and pressures. The scientists then measured the damage this caused by exposing the skin samples to a fluorescent dye. The more damaged the skin, the more the fluorescent dye was able to permeate it.

The team found that the mechanical rubbing caused keratinocytes to shrink and wrinkle in the direction of the rubbing. Gaps also formed between the keratinocytes, degrading the skin's barrier function. They then developed a mathematical formula to describe the permeability of rubbed skin, which can be estimated from the amount of strain applied.

"We believe our findings could improve transdermal drug delivery and we plan to investigate the development of novel topical drugs that can be applied to the skin by rubbing," says Kikuchi.

He adds that their findings could apply to the current pandemic if rubbing face masks were found by further research to cause skin damage, potentially allowing another avenue for COVID-19 infection. The team did not specifically investigate this topic and Kikuchi encourages people to continue to wear face cover-ings that fit comfortably over the nose and mouth.