A two-in-one technology provides 3D images of structural defects, such as those that can develop in aircraft and power plants.

A new system, developed by Tohoku University researchers in Japan in collaboration with Los Alamos National Laboratory in the US, takes 3D images that can detect defects in metallic structures. The approach was published in the journal Applied Physics Letters and could enhance safety in power plants and airplanes.

Yoshikazu Ohara and colleagues at Tohoku University use non-destructive techniques to study structures, and wanted to find a way to produce 3D images of structural defects. They developed a new technology, called the piezoelectric and laser ultrasonic system (PLUS), that combines the strengths of two different devices to produce high-resolution 3D images of defects in metallic structures. 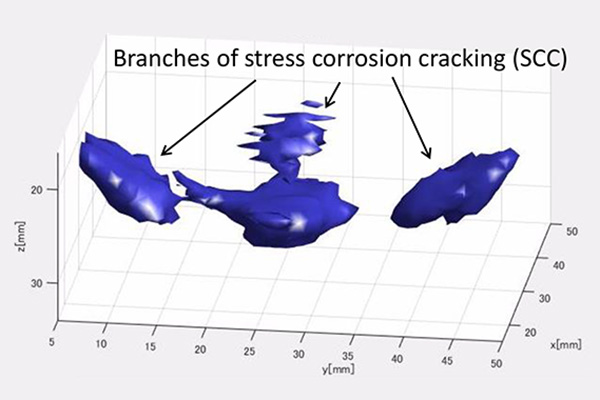 "We believe that PLUS will pave the way for accurate evaluation of material strength, the identification of defects, and finding out how defects initially started to form," says Ohara.

Currently available 'ultrasonic phased arrays' are a powerful tool for imaging internal defects in solids, but only in two dimensions. These devices are made of a piezoelectric one-dimensional array transducer with a limited number of individual elements - up to 128. Electrical pulses in the piezoelectric elements are converted to a mechanical vibration that emits ultrasonic waves into the material under investigation. Ultrasonic waves are reflected back from internal defects and converted into electric signals that can be translated into a 2D image.

In PLUS, the waves generated in a material from a piezoelectric transducer with a single element are received by a laser Doppler vibrometer, which moves around the material's surface to get a good 2D scan of the area. As a result of this process, it receives the scattered and reflected waves at a much larger number of 'points' than those that can be received by a piezoelectric array transducer. The information received by the laser Doppler vibrometer is transmitted by an oscilloscope to a computer, where it is processed by an imaging algorithm and converted into a 3D image. 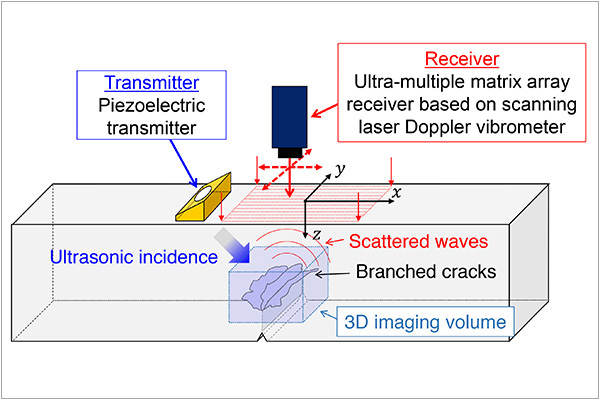 "Ultrasonic phased arrays, which are on the cutting-edge of ultrasonic inspection, can only provide 2D images because of their limited number of elements," says Ohara. "PLUS makes it possible to have thousands of elements as a result of incorporating the 2D scan of a laser Doppler vibrometer in place of a piezoelectric array transducer."

Although tested only on defects in metallic materials, Ohara says their technology can be applied to other materials, including concrete and rock, simply by changing the phased array transmitter to one that emits a different range of ultrasound frequencies.

One drawback is the long data acquisition and processing time, which takes several hours. However, this can be shortened by adopting a high-speed analog-to-digital converter in place of the oscilloscope, using a more sensitive laser Doppler vibrometer, utilizing different imaging algorithms, and employing a graphical processing unit.