A research group at Tohoku University and Japan Advanced Institute of Science and Technology has developed a molecular robot consisting of biomolecules, such as DNA and protein. The molecular robot was developed by integrating molecular machines into an artificial cell membrane. It can start and stop its shape-changing function in response to a specific DNA signal.
This is the first time that a molecular robotic system has been able to recognize signals and control its shape-changing function. What this means is that molecular robots could, in the near future, function in a way similar to living organisms.
Using sophisticated biomolecules such as DNA and proteins, living organisms perform important functions. For example, white blood cells can chase bacteria by sensing chemical signals and migrating toward the target. In the field of chemistry and synthetic biology, elemental technologies for making various molecular machines, such as sensors, processors and actuators, are created using biomolecules.
A molecular robot is an artificial molecular system that is built by integrating molecular machines. The researchers believe that realization of such a system could lead to a significant breakthrough - a bio-inspired robot designed on a molecular basis.
The molecular robot developed by the research group is extremely small – about one millionth of a meter – similar in size to human cells. It consists of a molecular actuator, composed of protein, and a molecular clutch, composed of DNA (Fig. 1 A). The shape of the robot’s body (artificial cell membrane) can be changed by the actuator, while the transmission of the force generated by the actuator can be controlled by the molecular clutch (bottom of Fig. 1 A).
The research group demonstrated through experiments that the molecular robot could start and stop the shape-changing behavior in response to a specific DNA signal (Fig. 1 B). 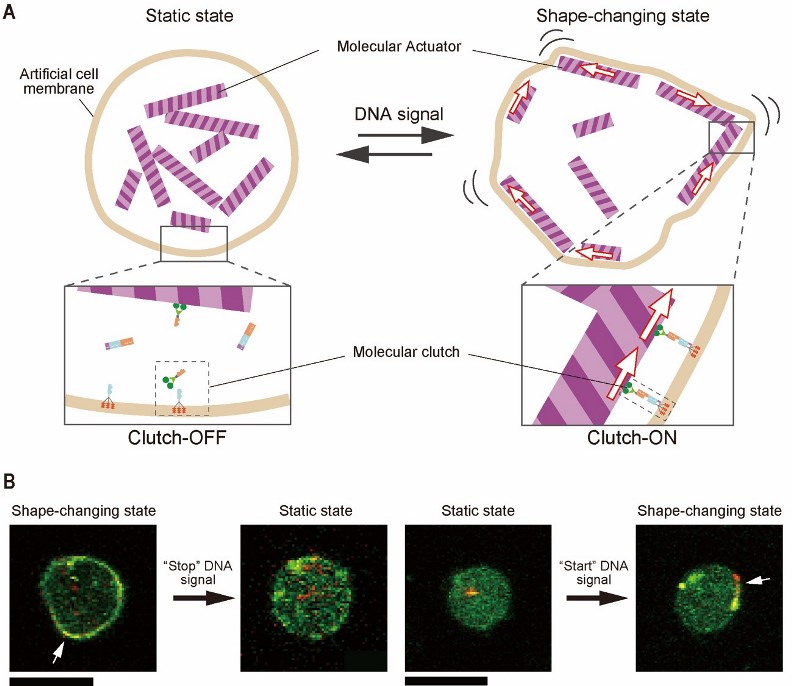 Fig. 1 (A) Schematic diagram of the molecular robot. Molecular actuators work inside the robot, and the shape of the artificial cell membrane, which are bodies, are changed. When a DNA signal is input, the "molecular clutch," which transmits the force from the actuator, controls the shape-changing behavior. (B) Microscopy images of molecular robots. When the input DNA signal was "stop," the clutch was turned "OFF," and consequently, the shape-changing behavior was terminated (left side). The initiation of the shape-changing behavior when the DNA signal input was "start" was also confirmed (right side). Scale bar: 20 μm. The white arrow indicates the molecular actuator part that transforms the membrane.
"With more than 20 chemicals at varying concentrations, it took us a year and a half to establish good conditions for working our molecular robots,” says Associate Professor Shin-ichiro Nomura at Tohoku University’s Graduate School of Engineering, who led the study. “It was exciting to see the robot shape-changing motion through the microscope. It meant our designed DNA clutch worked perfectly, despite the complex conditions inside the robot."
The realization of a molecular robot whose components are designed at a molecular level and who can function in a small and complicated environment, such as the human body, is expected to significantly expand the possibilities of robotics engineering. The results of this study could lead to technological developments that could help solve important medical issues - such as a treatment robot for live culturing cells and a monitoring robot for checking environmental pollution.
"The paper by Nomura and coworkers represents a major step towards the development of autonomous soft microrobots,” says Dr. Friedrich Simmel, professor at the Technische Universität München. “Based on this achievement, in the future similar systems could be developed that display artificial phototaxis or chemotaxis, or similar 'intelligent' behavior."
The research results were published in Science Robotics - a science magazine published by the American Association for the Advancement of Science - on March 1, 2017. It was supported by the JSPS KAKENHI, AMED-CREST and Tohoku University-DIARE.
Publication Details:
Title: Micrometer-sized molecular robot changes its shape in response to signal molecules
Authors: Yusuke Sato, Yuichi Hiratsuka, Ibuki Kawamata, Satoshi Murata, Shin-ichiro M. Nomura
Journal: Science Robotics
DOI: 10.1126/scirobotics.aal3735
Contact:
Shin-ichiro M. Nomura
Graduate School of Engineering, Tohoku University
Email: nomura